I can’t believe it’s 2019 already, where does the time go? I work on an adult unit and it has been so weird seeing birthdays in this millennium. Weren’t they just born a few years ago??

Anyway, enough of feeling old, back to crafting. I’m rather proud to say that today I accomplished 2 new things. I successfully cut fabric with my cricut maker, and then I successfully put a buttonhole in that fabric in order to complete a hanging towel. 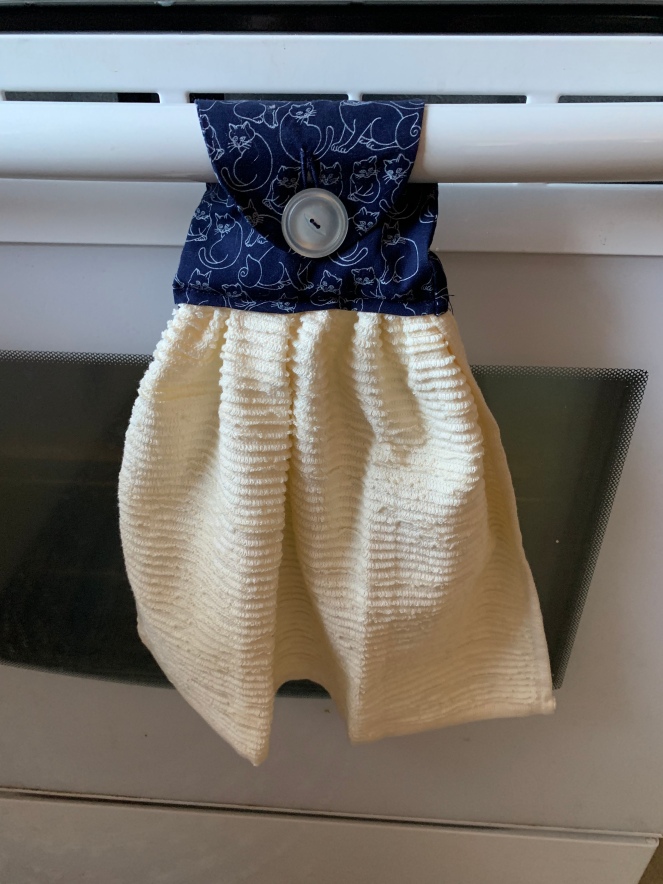 In (probably) way longer than it should’ve taken. But it’s done! Nowhere near perfect but still done. I wanted to practice on something for me, so I can make one for a dear family friend.

His mother had passed about a year ago, and while going through her things he found her sewing boxes. He knows I love to sew and thought I would be interested (how right he was).

These are just the coat buttons, she must’ve cut them off of all of their winter coats through the years, smart recycling really. There are 2 more bins like this with all sorts of buttons and notions.

The one that got me was this; I sent a picture of the threads to my mom. She sends back that my great-great grandparents used to work in the factory that made one of the spools in the picture.

The American Thread Company used to be based in CT, and apparently both of them worked there for years, along with a few other family members. Who knows, maybe they helped assemble that spool. Now she’s got me wanting to hunt down more of this stuff to put together a cool shadow box to put on the wall of my craft room. Luckily wooden spools aren’t really that expensive on eBay, so I’ve got my eye on a couple of lots of them.

But I haven’t just been looking for old thread spools and trying buttonholes, I also sewed 2 shirts for a friends baby. He just turned 1, which I felt meant he needed some new homemade goodies.

They’re both technically Mega Max Raglans, but I left off the mega and just made shirts. Boring I know, but I was in a hurry. The “You’re Welcome” shirt is backstitch fabric that I bought on the B/S/T Facebook page. It was actually meant for my nephew but he’s so big now that it’s too much color blocking to make it work. Star Wars was one I found at Joann, it may look familiar because nephew did get a tank out of that one. I love the max raglan (mega max, whatever) for the kids because it just seems to fit everyone. And the add on options are endless, I’m determined to make something super cute for the nieces.

I leave you with some of my Christmas creations I couldn’t share before the day.